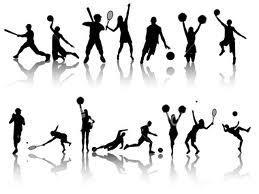 We work with highly trained sports' coaches to offer the children a wide range of sporting opportunities both during curriculum time and at after school clubs.

Even in this difficult time, it's important for children to remain as active as possible in order to stay physically and mentally healthy.

At the bottom of this page are some documents with plenty of ideas to keep children moving and entertained :)

Please have a look and enjoy!

If you have any questions about Sport in St. Peter's, please see Mrs Stimpson(Year 5) - PE Co-ordinator

Last year St Peter's achieved the Bronze Award as part of the School Games Partnership. We participated in various competitions both interschool and intraschool developing passion for sport within school and promoting an improved interest in new sports too! This Autumn term KS1 and 2 have enjoyed a tremendous amount of sport including swimming, football, netball, dance and gymnastics!

Sports Leaders News - January 2017- A massive thank you to our fully trained Year 6 play leaders, who used their skills to organise a mini multi-skills tournament for 3F and 3C. The children in year three loved participating and year six did a wonderful job at coaching them. Year staff were very impressed by the maturity and confidence the year six boys and girls had shown. More play leader training to come in summer 2017 :)


Orion Swimming Gala- January 2017 - WINNERS!
A HUGE congratulations to all the children from years 3,4,5, and 6 who took part in the Orion swimming gala at Blue Coat School. First place against other local primary schools, well done! The trophy will take pride and place at our school entrance for all to see :)


Hockey at Lordswood Girls - October 2016 - Well done to the Year 5/6 hockey team who came third in their group as part of a South Birmingham hockey tournament.
Thank you to the parents who came along to watch, it was our first hockey competition and everyone played brilliantly!


September 2016 - A group of Year 6 children were chosen to become specialist 'Sports Leaders' this term, organising games and activities to play with members of Years 3 and 4 at lunchtimes. Those children from Year 6 were given coaching from Shenley Academy as part of our healthy schools programme and 'Change for Life' clubs. Well done to those children who were successfully trained, we are looking forward to seeing you in action at lunchtimes soon :)


Achievements in 2015-16
Aston Villa - Second Round - March 4th 2016 - Runners Up - Congratulations to the Years 5 and 6 team - a great performance against some tough competition! A big thank you to Mr and Mrs Buchanan for helping transport to the stadium and back :)

Netball Tournament Priory February 2016 - Runners Up - Well done to all the girls in years 5 and 6 for an incredible effort in the competition held at the Priory School. Many thanks to the parents who patiently waited for our return, our apologies for the late finish!

Athletics at Hillcrest 2016 - Winners! - Congratulations to the Years 5 and 6 team who took part in the indoor athletics tournament held at Hillcrest. We won! Thank you to all the parents who helped ferry children to and from the event and for staying to cheer us on!

Football Blue Coats 2015 - Well done boys! The team went on to beat 5 other schools to win the whole tournament! The team will now go onto the semi finals held at Aston Villa stadium in March 2016. Well done everyone! :)

Football - The St Peters football team have Tag Rugby at Harborne Academy December 2015 - Another winning performance from the Year 5 boys and girls! Well done everyone! :)

had a wonderful start to the season. We played St Mary's in a friendly and secured an amazing victory of 6-5! Fabulous hat trick from Morgan in Year 6!

The team are once again included in the Harborne Schools football league, which began in November. The boys completed their first match against Chad Vale and won 4-3! Excellent start everyone!

Games will begin again once we have lighter evenings :)

Year 3 and 4 Football Tournament at Shenley Academy
A great opportunity for early KS2 to get involved in team football! Children from different schools in the local area came along to Shenley Academy who hosted the event. The children chosen competed so well, and we came runners up. Fingers crossed for more opportunities in the future!

Basketball Tournament at Shenley Academy - Wednesday 14th January - Runners Up
Well done to all those children who took part in our first ever basketball competition. An amazing time was had by all with lots of baskets scored.

Indoor Athletics - Shenley Academy - Friday 23rd January - 5th.
Well done to all the Year 6 children who took part in the Indoor Athletics, where we competed against 8 schools. The children showed great skill in running and throwing, as well as some children proving to be excellent long jumpers too! Thank you to all the parents who came to watch and waited for the games to finish. The children really enjoyed themselves!

Netball - St Peters V Harborne
The first match of the new year and it was very cold! The girls tried their best with some good defending from St Peters. Unfortunately, the game ended 8 - 0 to Harborne. Better luck next time girls! :)

Football - St Peters V St Laurence - Friday 6th February
The team battled hard in a 9 -a - side match as part of the HMS shield competition. Unfortunately the final scored was 4-0 to St Laurence, but the boys didn't lose faith and worked excellently as a team. Steph, the team's coach, was very proud! Good luck with the rest of the Harborne league everyone!

Skiing Competition at the Ackers Centre in Birmingham

On 22 March St. Peters School participated in the Birmingham and South Midlands Schools Ski Race. St. Peters entered one team of 3 boys into the under 10s category. Each skier must make 2 timed runs of the slalom course and the best time from a skier’s two runs will be used for the team event. As well as competing for the school each skier was also ranked using the sum of both times for their individual category.

Well done to them all.

Congratulations to all the children who took part in the annual KS2 sports day held on Friday 10th July.

Everyone had a wonderful time in the sunshine, competing in events such as the sack race, the three legged race and the egg and spoon. A big thank you to all the parents who came to watch the events, especially those who took part in the parents race :)

Sporting Achievements 2013/14
St. Peter's took part in an indoor athletics tournament at Shenley Academy on Wednesday 8th January. The children selected from Years 5 and 6 worked very hard and received forth position against other local primary schools. Good effort everyone!


SPORTS RELIEF 2014 - Friday 21st March Thanks to everyone who took part in the mile run! We helped raise lots of money for charity and had a lot of fun doing it!